skip to main | skip to sidebar

Time of your life, huh kid?

I recently happened upon Dennis Cozzalio's excellent blog, Sergio Leone and the Infield Fly Rule. As the name implies, it's a dense and decadent dark-chocolate shrine to two great national pastimes (and personal passions of mine) movies and baseball. Fortunately, there's no content about pork, otherwise I'd be incapable of ever leaving.

Along with some excellent film criticism and commentary on the state of movies generally, Dennis occassionally comes up with these questionnaires just, I suppose, to provoke self-reflection and keep the conversation lively. His latest is Professor Brainerd's Christmas Vacation Quiz. Having taken it, I can say it not only succeeds wildly on both counts--I especially liked how it teased out some unexpected or forgotten reasons I love movies--but it's also left me a bit anxious about what Opening Day might hold in store. Baseball has become more of a nostalgic abstraction than an active interest.

Anyway, my answers are posted in the comments area of the Quiz and also below. Feel free to comment and offer answers of your own.

1) Describe the moment when you knew you loved the movies

Sometime between summers of ‘76 and ’77. That’s a long ‘moment,’ I know. Through an odd combination of fate and nepotism, I landed a part-time job running the projectors at The State, an All Seats $0.99, second-run theatre in . I was 11. 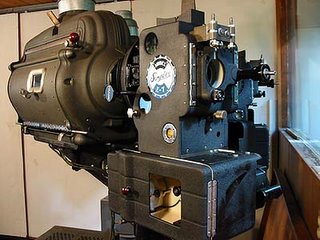 Mind you, these were the waning days (at least at The State) of alternating, carbon-arc fired projectors running 20-minute reels. Remember the little cue dots that would flash in the upper right hand corner?

Most of it was borderline to wholly inappropriate for a pre-teen. But it sure beat the hell out of a paper route. Especially since, along with wolfing down my weight in popcorn and soda (or pop as we called it then), I made enough money (@ $1.10/hr.!) to buy a sweet 10-speed. The bike is long gone but the impression of those movies on the screen in my head--along with screams of 'Focus!'-- is as vivid as ever.

Of course, ’77 was also the Year One of my chronic cinephilia, on account of a little indie sleeper called Star Wars. Which really just makes Revenge of the Sith feel all the more like a betrayal. What the fuck, George?! You were supposed to be the chosen one!

The die was cast.

2) What prop or costume from a film do you most covet? *

Chuck Yeager’s A2 (leather flight jacket) from The Right Stuff.

3) Take a famous role and recast it (for example, Audrey Hepburn instead of Andie McDowell in Four Weddings and a Funeral) *

Robert Duval instead of Al Pacino in Scent of a Woman.

Sting as Lestat in Interview w/ a Vampire. (Could just be the subliminal influence of his “Moon Over Bourbon Street” talking.)

Also, I always thought a young Martin Sheen would have made a great Jack Ryan (The Hunt for Red October, etc.)

Plus, Phil Hartman’s Chuck Heston bits on SNL (“It’s people! Soylent Green is peeeeopllllle!”) pretty much did him in for me. Actually, Wink, I’d like to combine this question with the previous one and imagine for a moment that they swapped all their roles. I’d love to have seen Kennedy in Planet of the Apes. Or chomping a cigar, Joe Patroni-style, during the chariot race in Ben Hur.)

Color me stumped. Oh, wait, I’ve got one: Bobcat Goldthwait in Police Academy 2.

6) Worst performance in a famously revered or otherwise great movie?

Andie McDowell in Groundhog Day. I just wince every time she opens her mouth.

Grand Moff Tarkin. What more can I say?

Gotta go for the mainstream choice here, sorry: 48 Hours. Although I must give a nod to Streets of Fire as a pure guilty pleasure. You got and a snarky, weasely Rich Moranis, and Introducing Willem DaFoe as The Heavy. Those soaring Jim Steinman musical numbers. And The Blasters! And the Ry Cooder score! So maybe I’m double-dipping or gilding the lily (dipping the lily twice in gold?) since I get the feeling the question is meant to shine a light on the idea that the guy’s whole schtick is cult/guilty pleausre?

9) Favorite musical score from a

Anything Lalo Schifrin ever did.

Koyaanisqatsi by Philip Glass. You literally can’t separate the music from the visuals.

10) Describe the most scared you’ve ever been in a theater, or the scariest moment you recall seeing in a movie

I’m just not a horror-movie fan, so I should opt out of this one.

I have to say, though, that the first twenty minutes of Saving Private Ryan was nothing short of a mouth-agape, consciousness-altering moment for me. It delivered the utterly un-romanticized horrors of war, the chaos of combat like no movie I’ve ever seen—before or since. I wasn’t scared, so much as, I dunno, enlightened. Horribly, horribly enlightened.

Also, the TV ads for The Exorcist were enough to give me nightmares as a just-about-to-take-first-communion Catholic kid. Which might explain my general aversion to horror pics—especially anything satanic. I've since developed an equally strident aversion to Catholicism, but that's another blog post.

Okay, you’re just making these up now, right? Just to flush out the posers?

12) Favorite Movie (doesn’t have to be Christmas oriented)

How the Grinch Stole Christmas!
(The 1966 Chuck Jones version—NOT the live-action knock-off)

The Ref (as an antidote to holiday hypoglycemia)

13) Worst movie (doesn’t have to be Christmas oriented)

Even though I wouldn’t deign to see it, I’m going to have to go with the aforementioned live-action Grinch, just on principle. Why, Ron Howard, why?

Gary Cooper. Man, what a scene-chewer! Kidding--just wanted to see if you're paying attention.

Upon consideration: William Shatner. Though, for some reason, Edward G. Robinson comes to mind. Probably the earlier mention of Soylent Green.

Here, I have to cop to being out of my depth. I can name lots of Fellini titles, and I’ve used the expressions “Fellini-esque” and “You don’t have to be Feillini to figure that one out” with impunity. But I have yet to actually see a Fellini film. The horror. The horror.

, of The New Yorker, hands down.

Much as I love Mewes’ shamelessly id-driven Jay trying to get busy with Linda Fiorentino as all life as we know it is about to be snuffed out, in Dogma, Lee’s performance as Buddy/Syndrome in The Incredibles (on top of the rest of his work) tips the scale in his favor.

18) Best use of a natural location setting in a movie

The Last of the Mohicans (four years living in , near Chimney Rock, where the final showdown with Magua takes place, will do that to you.)

19) Worst squandering of a natural location setting in a movie

20) Favorite song from a movie

First thought: Bruce Springsteen’s from Jerry McGuire. But really that’s more like 'most grievously overlooked by the Academy for best song nominee.' What’s with those people and their unholy affection for Phil Collins treacle?

From an actual musical: "Me ‘Ol Bamboo" from Chitty Chitty Bang Bang. Gotta love the ribald subtext of Ian Fleming. Especially in a "family" film.

What am I, Freddy Frankenstein? (“It’s pronounced ‘Fronk-en-steen’”)

Again, not enough appreciation for the genre to offer up a worthwhile answer. If I were to see one, it’s probably be the Frankenstien movie with Deniro and Ken Branaugh.

Fay Dunaway in Bonnie and ; Myrna Loy in The Thin Man.

24) Director you’ve always felt deserved more attention than he/she ever got or has gotten up to this point, and a highlight for you from his/her career

There was that one guy, Albert Hickock, Freddy Tchotchke, something like that. He did a bunch of movies that were pretty good. Really messed with your head. There was the one with the guy in the shower.

Seriously, um, what the hell happened to Paul Brickman?

Risky Business is The Graduate of my generation, with the role of “plastics” being performed by “dermatology.”

Then Men Don’t Leave was a really worthwhile, if lower profile, sophomore effort. Then, poof. He’s gone from the radar.

Also, I have to second Snake Plissken’s nomination of Michael Mann. You look over his filmography and you can’t help thinking, Wait, these were all done by the same guy? He’s got so much range; the only thing many of his films have in common is a journeyman’s attention to craft and detail. He’s one good romantic/screwball comedy away from being this generation’s Howard Hawks.

Dead heat. Though, given that Risky Business is fresh in my mind (“He said the lady had knowledge. And he was glad to get that knowledge. Because college girls can smell ignorance. Like dogshit.”) I’m going with older and presumably “wiser” Ms. Yeoh.

26) If the movies’ were to give you a Christmas gift, or a gift for 2006, what would it be? (I mean “the movies” in the most general sense—the film industry, the actors, a director making a certain film, whatever)

Oh, so not the same answer as question #2 then. Got it. (‘Cause, seriously? Yeager’s A2 would absolve a whole jumbo tub of popcorn’s worth of sins.)

Would mild electrocution to or near the genitals of the ass clowns who ruin a movie with their incessant jabbering and cell phone ringing be too much to ask?

I went to, like, three movies last year and every one was, to some degree, marred by a basic lack of consideration. Things that used to be the irksome exception seem to have become the rule.

I know it’s not really ‘The Movies’ to give, but if they could somehow get the man-cub to sleep through the night and be able to be left with a competent sitter, that would be good, too. Yep, that and the ‘nad-shockers and we can pretty much call it a day. God bless us, every one!

* Thanks for the suggestions, Jen!

Okay, so that's 26. But what's the holiday season without a surprise stocking stuffer? Happy holidays, everyone!

Thanks, Dennis. What a great ride!

Mr. Middlebrow
United States
I put my pants on just like the rest of you, one leg at a time. Except, once my pants are on, I make gold records.